During a casual conversation with long-distance friends, the topic of strip clubs came up. I declared, in a somewhat righteous manner, "There are no strip clubs in Virginia! We have laws against that sort of thing." Imagine my nose pointing in the air as I sniffed arrogantly. Why the pomposity? I was lost in the moment.

I was reminded of the conversation as we passed through Richmond on I-95 and saw billboards advertising Paper Moon: Richmond's Finest Gentlemen's Club.

"Huh," I mused. "Virginia does have strip clubs!" A google search provided a directory of 23 clubs located throughout the state, clustered primarily in Virginia Beach and Norfolk, with a handful in Richmond (doesn't every capital of a conservative state have titty bars?) and a couple here in Northern Virginia. Who knew?

I don't have any strong feelings for or against such places. I've even been to one. Once. Well. It wasn't a pure strip club, it was a Girl's Night stripper event at a now-defunct gay bar, Tracks, in the District. Gay bars don't flourish here in Virginia. There are even fewer of them than there are strip clubs. Shocking, I know. We Virginia homosexuals must venture across the river to mix with Our Own Kind in public.

So there we were on that mild summer night, a throng of lesbians of varying ages gawking at the skantily clad dancers gyrating on the stage. I felt awkward, quite awkward actually. I was around 25 years old, my life in a complete shambles transition. What was I doing there? Peer pressure. My friends thought I needed to get out of the house and have some fun. They were probably right.

Those friends badgered me into tipping the dancer I'd been oogling watching. To this day that memory is strongly ingrained: me shyly approaching, unexpectedly making eye contact and quickly looking away. But at what? What drew my eyes? Well her fabulous abs for one thing, which were even more spectacular up close. She smiled, but I don't know if it was a real smile or a plastic one. Didn't particularly matter. She shimmied provacatively as I tucked the dollar into the waistband of her panties while turning twelve shades of red. I ran casually strolled back to our table. My friends greeted me with whoops and hollers. I grabbed my beer, drank deeply and waited for my heart to stop beating so damned fast.

Have you ever driven down I-85 from Virginia to North Carolina? The... umm... facility pictured below can be seen from the highway just after crossing into North Carolina. Many times, I've seen a red neon sign flashing "OPEN" displayed in the window, otherwise I'd be certain it is abandoned. I've always assumed it is a strip club. Despite the sign announcing its status as an innovative health club. A health club with an all girl staff.

What do you think? 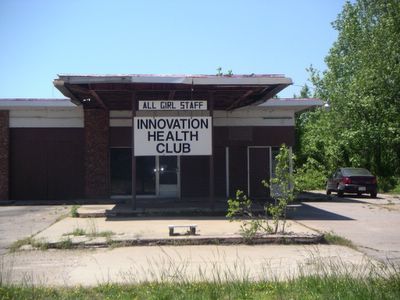 Suzanne... what to say here? You mean you didn't know about the strip club right there in Crystal City?

Oh, and there is a strip club in Manassass, too.

Not that I have ever been to either, mind you.

Well now, that looks like a mighty scary place, strip club or no.

We've got strip clubs galore over here, but I've never been in one.

I think they need a landscaper. Are they only open at night? What a supremely un-inviting facade.

(And btw, a to do..way down on the list-that daughter is urging upward.)

I'm thinking the 'pump' might still exist there, somewhere...

I agree, that looks pretty scary. I think I have seen a similar place in Texas Chainsaw Masscare.

Been inside 3 strip clubs, one men (which was an ok time) and 2 of the sediest ones for women I've ever seen. I really want to go to a nice gentleman's club though---girls normally get in free and drink pretty cheaply as well. : )

What's the nature of the "innovation," you ask? They will cure all your aches and pains by killing you.

Since scout and I live in the pron capital of the U.S. and near a number of strip clubs, the only thing I can weakly offer is that that doesn't look like any strip club I've ever seen. I don't think I'd darken it's doors.

The one time I was asked (really pushed) to go to a strip club, I refused and am glad for it. It's certainyl not a case of wondering, "what if?"

Thanks for sharing your experience!

I haave seen that place many a time - and wonder who exactly patronizes it. Creepyscarygrittyicky.

They're more go go bars than strip clubs. The girls can only go down to bikinis legally.