I remember The Boy's first Spring semester with auditions for summer work. I wasn't there. I lived it vicariously through the sounds of his voice as he told his stories. That phone call when he announced his first job offer to be a professional actor. I didn't even care what or where the job was, the excitement bubbling in his voice was all that mattered.

The Boy is a senior in college. Have I mentioned that? Graduating in mere months? Perhaps I have. Mentioned it. But can it be said too many times? Not from where I'm sitting. Vicarious living and all. My baby. I still can't figure out where the years went.

So about those auditions. This week and forward.
Break a leg, my son. Break both legs.
You know you've got it going on.
Go grab it.

I'm so proud of him I embarrass myself at times. 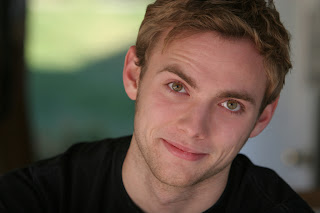 Awww, there's no shame in being a doting mother. (And that is one good looking man!)

What a dollface!
Be proud Suzanne, go ahead!

He loves it. He loves every word of it.

I can hardly believe that he's finishing college!

He is such a handsome boy!

He's a beautiful young man. You are both very lucky to have each other.

What a handsome young man! You can never be too proud of a parent!

I love that concept: "perpetual spring."

He obviously gets his good looks from his mother.

Too bad my Amanda isn't a little older...

Handsome, smart, talented. I'd say you have reason to be proud.

what a cutie! good for him. I'm sure he can only love that you gush about him here. We do.

He is very cute! Good luck!!

The incredible love you have for that Boy is one of your most amazing qualities... you both shine.

I bet you haven't tired at all of hearing him described as "handsome" and "cute" have you?

Of course, he is all that, he's your son.

Jeepers---what a great looking kid. Congratulations on having him finish college. You can certainly be proud of that, too.

Trop, funny thing is The Boy is the spitting image of his father in that photo: same dimples, same wry smile, same glint in his eye. Kinda freaks me out at times, but in a good way. :)

He's such a cutie!

Congratulations in advance for the upcoming audition season, graduation and beyond.

My youngest daughter is a professional actress, she travels the country doing regional repertory theater. It's a lot of work - marketing herself, traveling around to different auditions. She was the only person in her grad class to not move to New York after she got her masters and is the only one who has worked continuously ever since. Advise your son to go to Grad School - that's where budding actors really get their training.