Spring Fever. We Have It. 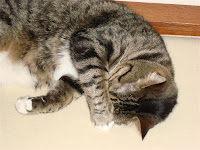 We've got a cat. He's not our cat, but he comes to visit often enough that we keep a bag of his food in the cabinet. I haven't slipped and called him Figero yet, but I'm certain I will eventually, much in the same way I occasionally slip and refer to Pixie as Cosine.

Oliver is an indoor cat. He thinks he is an outdoor cat, consequently one must be very careful when opening exterior doors. Oliver is quite skilled at slipping by those not paying close attention. His quick escapes are followed by wild chases through the neighborhood. I'm not sure what he thinks he's running from or where he thinks he's running to, but he's definitely in a hurry.

I'm of the opinion that a cat who wants out that badly should go on out. Maybe he needs to get his ass kicked by the neighborhood menagerie in order to develop an appreciation for the safety of an interior perch on a windowsill. Maybe he'd kick their asses. Maybe he just wants some fresh air or has a hankering for some fresh squirrel meat. But his mother knows him better than I do and she makes the rules. An indoor cat he is.

As has become a loose routine, Oliver arrived this weekend in company of the Next Generation, Emily and Jackie. Emily bubbled over with enthusiasm born of Spring. She twisted her sneakered toe into the ground and blurted, "Can we build a fort in the backyard this weekend?!"

I will leave to you to decide what it says of us that we hesitated not at all to undertake such an endeavor. And so it was we enjoyed the Spring weekend somewhat frivolously yet with great purpose. Tools and imaginations were employed, good humor abounded. Evening found us, all of us, Oliver included (secure on a leash to his mild disdain that in no apparent way diminished his obvious delight at being outdoors), grouped together in our newly constructed fort, swilling sipping beers and swapping tales while reveling in the suburban delights of Spring. 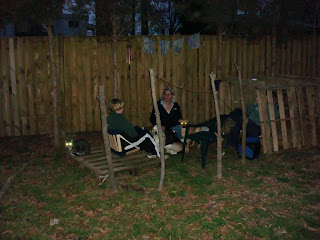 Forts. I highly recommend them.

I love you and I love our fort!

yep a treehouse is the next logical step....you need more pallets, string and beer

Oh a fort sounds like fun! Add in the treehouse, a trampoline and a tire swing and I think we've got the perfect spot for the next blogger get together!

Treehouses and beer do NOT mix. Don't ask me how I know.

I think Sassy is onto something.

Why we can't haz beer and treehouse?

Martin very good at these things.

That is, very good at making decisions about what to do or not do while drinking beer.

I vote yay for the treehouse and bloggers event in Virginia! :)

I have to agree with you for the most part, Sub.Les...if animals want to go out that badly, then they should be allowed to do so. However, living in the wilds of Western Mass, high in the hills, we have packs of roving coyotes to contend with, and sometimes Fisher cats. My small, fluffy, white lap dog would make a nice crunchy appetizer. Hence, he remains at all times on a leash and stares forlornly out of the window from his perch on the parlor armchair. It's sad. But he is at least still alive.