Cat In the Lap 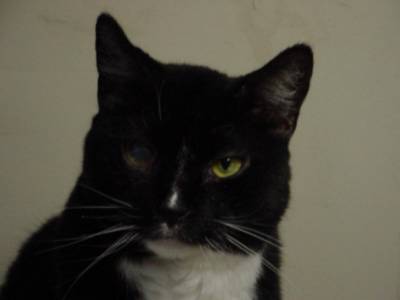 Figero, dear sweet Figero. Yes we love our ole one-eyed cat. But I'm allergic. So over the years he and I have developed a system so he receives the desired amount of affection while not causing me to sneeze, itch, act like a bitch to all those around me, and generally be miserable. (Why someone who is allergic to cats actually owns a cat is another story.) Our system depends on him keeping away from my hands and face and anything which ever may get near my face at any time. Simple enough yes? Well not always, but we've worked it out.

At least I thought we had. Our system worked for sixteen years. I really felt we had something going, ya know?

All that changed a few months ago while he was sick. During his time of need, I was his primary nurse. I brought him water, coaxed him to drink it, hand fed him the few nibbles of food he was able to ingest, sat with him and spoke reassuringly. And petted him. And paid the price for petting him. He got better. Maybe I'm a better nurse than I thought? Not really. It really was the medicine.

Odd thing about that medicine. It came in liquid form. Every night for months, he would be wrapped in a towel with just his head sticking out. Then his mouth would be pried open and a syringe-type thing inserted and quickly emptied while he tried to 1) escape, 2) close his mouth, and 3) keep himself from swallowing the liquid. But we were bigger, more dexterous and more determined than he. It got much more challenging after he started regaining his strength. Then once in a while he would escape and then we'd have to start the whole routine over again. After chasing him down and peeling him out from wherever it was he attempted to hide.

Since I am allergic and all, Wendy had the task of grabbing him, wrapping him in a towel and prying his mouth open. She was also the recipient of more than a few scratches if she didn't react quickly enough. Ouchie. I had the cushy job of merely slipping the syringe-like thing in his mouth and dispensing the hated liquid miracle drug. Because I'm the princess. Oh wait. No I'm not. But I got the cushy job anyway. And I would murmur sweet soothing words during the whole ordeal. Those words didn't seem to relax him or Wendy, but I murmured them anyway. It made me feel better to babble. It often does.

You'd think he'd hold a grudge against both Wendy and I for torturing him so. But no. It's only Wendy he seems to resent. And avoid. Yet she's the one who provided most of his stroking and petting before he got sick. Outside of when the grandparents visited, that is. When either of our mothers were in town, Figero would spend a great deal of time sucking up to them and reaping the rewards. I was pretty much only good for conversation and rubbing his head with my foot. Wendy's been working hard to win back his trust, however. It's a slow road.

Meanwhile, he's all over me. I can't sit anywhere in the house without him leaping up into my lap and settling in. Which is comforting and sweet. I have a better understanding of why the grandmothers enjoy it so much. There's not much that's more comforting than a warm soft purring cat in one's lap. Until he shifts and rearranges and his sharp claws prick into my delicate soft skin. Sometimes he can just be laying there peacefully and he'll flex his soft little toes and feet. Like stretching. Then those vicious needle-like talons will stab my poor innocent leg. Making me yelp. And squirm. It startles Figero when I squirm. Which causes his claws to extend. So my leg gets scratched again. And I yelp and squirm even more. It's a vicious cycle.

During one vet visit while he was being treated, our vet Myra whisked him away and brought him back with his claws neatly trimmed. They were no longer pointy and sharp and able to cause pain. When Fig's claws were short, it was a pleasure to have him sit in my lap. Except for the hairs, but they are much less painful than the claws. Unless they get in my face, of course.

I'd like to take him back to see Myra and have his nails snipped again. But Figero hates his travel carrier. And can't stand riding in the car. And he dislikes the vet. So instead I'll just suffer when he sits in my lap. Because he so enjoys sitting with me these days. And I enjoy having him there. Despite the drawbacks.