Do I seem a sympathetic listener? Do I present as understanding and non-judgmental? Do I appear the type to offer solid advice when solicited?

I don't think so either. Someone should tell that to the friends and acquaintances who recently decided, en masse but apart, to test those theories.

People with issues--real live angsty situations--who need someone to "talk to" surround me. It's a fucking epidemic, hitting from all sides: upside, outside, redside, blueside, and of course the ever popular "blindside." The past two weeks have been one startling dramatic revelation after another. The variety astounds. I pray it isn't contagious.

It may sound as though I'm complaining. Part of me is. It can be exhausting, this lending of an ear. Despite the deluge, a larger part of me is grateful for the opportunity to be there for others. Yes yes, terribly cliche. But I'm serious. What else are we here for anyway?

Today I write to celebrate those people, to applaud their courage and raw humanity. Their continuing efforts to Keep On Keeping On amid their troubles are downright inspirational.

Still. It must be said. I'm ever so glad to be listening to the ones with issues instead of being the one with issues. Who wouldn't be?
.
11 comments:
Labels: Me Myself and I

I borrowed this from The Tropopause.
I'm hoping to return it before she notices it is missing.

At present, I know more gay and lesbian people than I ever have before. When The Boy was younger, I was often the lone blip of homosexuality in our heterosexual world. By choice? By circumstance. Interesting times, those. It was all good.

These days I'm surrounded. It's been gradual, this expansion of my cultural vista. It's not sole source, either. I meet lesbians and gay men so often, in such a variety of circumstance, it has almost become commonplace. We are everywhere.

A rumor hit the mill that two friends, heterosexual females, were "hooking up" with each other. Surprised me enough to merit a raised eyebrow while rousing my curiosity. Who doesn't love a little titillating gossip now and again! And of course it was titillating. Since when is news of any two friends of any gender hooking up not titillating? It could be love! Or at least good sex.

Turns out the rumor was true. Not only were they hooking up then, but they are still a couple now. It's been over a year. At what point does "hooking up" turn into "having a romantic relationship" turn into "Hey world, I'm gay"?

Wendy pinned the nickname "pseudos" on those friends of ours, a term of endearment if you will. Are they lesbians? Situational? Transitional? Who knows? Them least of all, maybe. Does it matter?

Wendy and I are fortunate to have friends who span generations. Some are solidly heterosexual, some solidly homosexual. Others are trying to figure out who they are. Toss in a handful who have no fucking clue and all bases are covered.

What's a friend to do when a friend switches sexual teams? I know what my "friends" did when I traded up. Many of them fled. A few adapted.

I'm an adapter. A friend is a friend. Life is hard enough without stressing over something as basic as who someone loves.

I only wear t-shirts to work around the house or lay around the house, depending on the mood of the moment. Rarely do I appear in public so attired. The neckline of a t-shirt is just not flattering on me.

That's not to say I don't own many t-shirts. I do. Too many. Some have cute sayings, others are emblazoned with sports team logos, none are blank and none have breast pockets. They are white, black, yellow, green, but the color I most often choose to wear from my t-shirt collection is gray. Various shades of gray. Again, not the most flattering color on me but who cares when one is laying around the house?

My most favorite t-shirt of all, I stole. Swiped it from someone near and dear to me. I don't think he noticed or would even particularly care if he had. I justify the theft by telling myself I had paid for it anyway. It was part of The Boy's high school gym uniform. 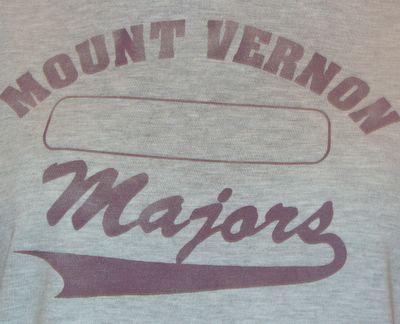 It is soft, soft, soft. Soft in the way only well-worn cotton can be. When I first obtained it, our last name was boldly lettered in black in the oblong designated to display such information. Over the years, repeated washings have faded that ink to nothingness. The other graphics on the shirt have faded too but no holes have appeared. Yet. I know they are coming. Old t-shirts embrace such things.

Why would I steal my son's shirt? I didn't think about it then but I know now. It's a tangible way of keeping a piece of him near. Silly me. Used to be I'd wear it to comfort myself. Sometimes I still do, but it has grown to be comforting in a completely different way. I'll miss it when it finally wears out.

The Boy is now a senior in college, on track to graduate in May of this year. He and I were in the midst of a conversation over the holidays when he said, "After this visit, I don't know when I'll be home again."

He's right, of course. The fairly regular patterns of life as a student will morph into life as he chooses to live it. Where will he work this summer? Where will he be in the fall? What opportunities will present? Will he land the job he seeks? When he does, where will it take him?

Over the past four years, cocooned in my stolen t-shirt, I've worked on figuring out how to be a parent to an adult child. I've often said each stage of his life has been more fun than the last, all equally as challenging and fondly remembered. The future, it comes, ready or not. The secret is not in the knowing, but in the being in it together as it unfolds around us.

The Boy will never live right around the corner, odds are he'll not even live in the same state. But we'll still be together. Family can be like that. I hope ours always is.

The title of this post is a line of a song that has been playing in my head for over a week.

It was one of the first I purchased for my new iPod. Yes, that's right. I've joined the earphone revolution (thanks Wen!). Today when I rode the Metro downtown I was plugged in like nine-tenths of my fellow commuters.

The song features a bright red box next to the title: EXPLICIT. I already knew that, but thanks Tipper & Company. Those labels are, I suppose, helpful for parents screening their little darlings' choices in music. It's too late for me. (Evidently too late for The Boy too. He's the one who first played this particular song within my range of hearing and later identified it for me.)

The music itself is soft and melodious, light rock, almost folky. The lyrics, while quite explicit, amuse while making a point. Well. Making a point may be stretching it a bit. Still, the tune is so damned catchy it's been trapped in my head for over a week!

The band is Tenacious D. I like Tenacious D. There. I said it. I'm mildly ashamed yet I don't know why. I'll get over it.

So. Can you readers identify the song from the post title? Am I the only one here who enjoys an occasional profanity-laden tune with style echoing through her head?
.
23 comments:
Labels: Me Myself and I

Of Loud Noises On a Rainy Night

I've already learned one important lesson this new year: when the fire alarm sounds, it's not a good idea to pull the pillow over your head and go back to sleep. I think I was supposed to learn that in kindergarten.

Of course one may assume when one is surrounded by good friends that said good friends will insist the sleeping beauty get out of bed and leave the house when alarms emit piercing warning noise. There is danger in being abed when the house is possibly on fire. Or so the cute dykey Fire Marshall reminded said good friends upon her arrival. See, they had abandoned not only me but one other slug-a-bed in the house with the fire alarms blaring at a decibel not usually conducive to sleep yet somehow not fazing we two left behind during the evacuation.

Am I really that grumpy when awoken from a drunken stupor sound sleep in the middle of the night? Evidently I'm bitchy enough for the thought of waking me to strike apathy in the hearts of good friends.

I imagine the discussion:

"Suzanne is asleep upstairs!"
"Shouldn't we wake her?!"
"I tried! She growled at me to leave her alone!"
"Oh. Well then. I guess it's cool to leave her where she lies. "
"Hey look! Here comes the fire truck! I hope the firemen are cute!"

Despite this potentially near-death experience, 2007 is off to a good start. The police came. We were not arrested. The fire department came. There was no fire. I was never in danger and my good friends could have safely left me slumbering during the disruption. But once a real adult arrived on the scene, said good friends selflessly pried me from my comfortable cocoon so I could huddle outside in the rain with the rest of them.

I feel so loved.

Lesson number two? This I didn't retain from kindergarten either: a nap in the sun is good for what ails you. Especially when nothing does. 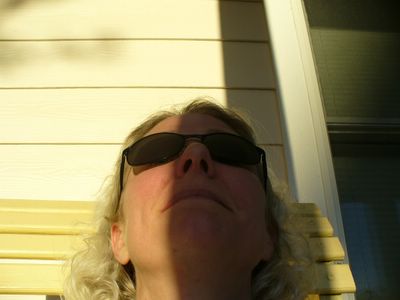