Overheard on the Metro

I was sitting in my usual seat on the Metro heading downtown. My usual seat is faces forward with nothing between it and the exit but legroom. It's the best seat on the train, bar none. I choose sides based on the time of day and which direction I am riding. I prefer not to sit in the sun because I can't wear my shades and my reading glasses at the same time. The Yellow Line runs from Huntington Station in Virginia past Mount Vernon Square in the District and is above ground almost as much as below.

Anyway. I was plugged into my iPod and reading a book. It was a hot day, a very hot day. The humidity made walking outdoors akin to breaststroking through a vat of the thick, rich shrimp & jalepeño bisque we adore from Roseina's. (Yes, I'm hungry right now. And they make a kick-ass bisque at Roseina's.) The cool interior of the train was a pleasantly stark contrast to the swampy outdoors.

They got on a few stops down. I didn't see them, but I instantly became aware of the two women newly seated directly behind me. They conversed loud enough for me to hear them clearly despite my iPod. Of course I had to listen.

Woman1: Hey, I've been on this train before!

Woman1: Yeah, when the kids were in town I wanted to take them to see George Washington's house.

Me to Myself: Huh?

Woman1: When we got off the train at Mount Vernon Square, we found out it wasn't there.

Woman1: Yeah, it's somewhere out in the country.

Me to Myself: It's not in the country, you dumbasses, it's in the suburbs. The SUBURBS! About 20 miles from where you are right this minute and two miles from my home in guess where? That's right! THE SUBURBS. Yeesh. Doesn't everyone know where George Washington's estate is? Or at least in what state? It's in Virginia, not the District. Crack a history book once in a while or even just a newspaper, there's good shit inside!

I'm usually not that harsh with strangers, even in my head. Apparently I am a little sensitive about our local historical sites. This is not news to me.

The two got off at the next stop. I glanced up to see what they looked like. They were both brunettes with long silky hair, wearing flip flops, shorts and tank tops. Woman1 had a rack and a half. Nice. Very nice. I didn't get to their faces.

Yes, evidently I am that shallow. That's not news to me either.
.
12 comments:
Labels: Local Life

Ever Owned a Teen?

We have, but we don't any longer.

See, he's grown up. Adult-style, albeit with glimmers of the teenager he used to be. Much like the rest of us.

Sometimes one must dig deep to find the good parts of teenagers. But those not-so-surface parts are the ones I hold most dear and, delightfully, are the pieces that tend to stick around as they mature. To preserve perspective, the memory retains some less-positive parts too. It's much like fondly remembering the delightful scent of a cuddly infant fresh out of the bathtub instead of focusing on that leaky diaper and the subsequent artistic use of diarrhea.

It is not uncommon for newly-minted adults to take charge of old furnishings and such from their parent's home to outfit their own residences. The Boy did that for us two years ago when he got his first apartment. But now he doesn't have an apartment and he most likely won't for a while. There's travel in his future. So where do the fairly minimal possessions he retained get stored? Why, our house of course. Hey, at least we get to use his spiffy blender until he settles down. I've had worse trade-offs.

We put The Boy on a bus yesterday, off to his summer job at the Hangar Theatre in Ithaca, New York. The musical is Hair, his role is "Claude," and yes, he, along with the rest of the cast, will be naked on stage at one point or another. The last show we saw him in was The Full Monty. I'm sensing a dangerous trend.

The past four weeks were the largest chunk of time he'd spent at home since leaving for college in August 2003. I didn't really know what to expect and, due to a certain circumstance, was slightly apprehensive. Turns out it was the most comfortable we've all been with each other since his journey to adulthood began in earnest as a teen. Not that we were uncomfortable before, it's more like we've reached a new plateau. Something has shifted in the family dynamic. It feels good.

So should you find yourself near Ithaca in July, go see the show! Afterward, buy "Claude" a sandwich or something. The Boy may be a man, but he still eats like a teenager!

Hop on over to this site and click on the picture of the skinny lady and her adorable smiling daughter holding bowl of Fruity Cheerios (aka the photo labeled Melodee H.). Each click brings her closer to the $500 prize. Honestly, their photo is the most adorable and deserving of your vote. Go. See for yourself.

$500!
Come on now, get busy.
Vote early. Vote often.
The contest ends this Saturday.
There's no time to waste!

Thank you and have a nice day.

UPDATE: She won! Thanks for helping out, y'all!

Other Duties as Assigned

Did you know I am a professional party planner? No? You thought I was a bookkeeper, didn't you? So did I.

Speaking of being a bookkeeper, I was snoozing to a cheesy Lifetime movie recently. Snoozing and TV-watching are perfect companions on a suburban afternoon. I can't be the only one who feels that way. Why else would there be so much crappy crap on TV if not to help an afternoon snoozer snooze?

So anyway, that cheesy Lifetime movie. Here's the scene: a pathetic young woman who still lives at home and her overbearing mother are having a heated conversation in the kitchen. "But I applied for a promotion at the restaurant, the hostess job!" the daughter whines. "You don't think I want to be a bookkeeper for the rest of my life, do you?"

My drooping eyes snapped open. WTF? How rude. What's she got against being a bookkeeper!? And she thinks a restaurant hostess is a step up? Yeesh. I groped for the remote, found it near my right hand and switched the channel. Ah. Baseball. That's good for napping too.

I like being a bookkeeper but I'm not much of a party planner. However since I was given the assignment, I am doing my best to rise to the occasion. Since it's work-related, I shouldn't really talk about it. The office is hush-hush non-blog fodder after all. Let's simply say it will be a rather formal affair at a fancy hotel in Old Town.

The party planning hasn't been as odious as I initially anticipated. Turns out fancy hotels in Old Town have great staff to help folks like me plan a party. Don't tell anyone, but I'm almost enjoying it. Next thing you know, I'll be tossing aside my red pencils and applying for a job as a restaurant hostess. Sure, sure I will.

Coming soon: Just what will this suburban lesbian wear to a rather formal affair at a fancy hotel in Old Town? And whatever will I do with my hair? I'm not quite sure yet, but I've got two weeks to figure it out. Wish me luck.

.
12 comments:
Labels: Not About Work 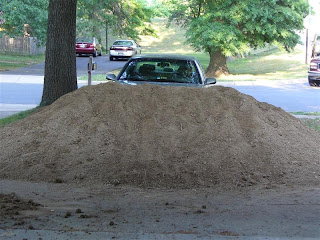 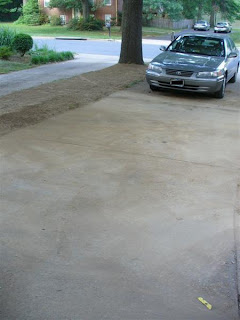 That's one reason it's been so quiet around here.

Here being here, of course. It hasn't been quiet there, as in our home, at all. Wendy, The Boy and I have been reveling in the joy of each other's company while bonding in the wide open spaces of our suburban habitat. Nothing like a little blood, sweat and tears to forge fond familial memories. It's a bonus our landscape is being rehabilitated in the process.

Wendy just read this and called me a sap.
Good thing it's true because I don't have the energy to deny it.
.
10 comments:
Labels: Home Improvement
Newer Posts Older Posts Home
Subscribe to: Posts (Atom)