I've Got a Food Theme Going On

Who: Me. Wendy. Jackie. Emily. Pixie. Dudley. Oliver.
What: hanging out
When: a recent rainy and cool Saturday evening
Where: our screened porch
Why: because we can

When it rains, as it was that evening, suburban slugs occasionally slip in for a visit. Emily joyously appointed herself chief-in-charge of porch slug removal. Seems she has a karmic debt to repay due to slug abuse as a youngster. We are happy to indulge her. She busily relocated the few who popped by that evening.

I don't understand why someone who casually picks up slugs with her fingers and gently carries them in the palm of her hand while singing happily can turn into a quivering mass of fear when it comes to other icky buggy things. Like spiders.

See all hell broke loose when, while on slug patrol, Emily spied The Spider. I slouched in my chair and acted disinterested. Soon Jackie and Wendy had joined her in prancing anxiously around the general vicinity of the The Spider, who by then was defiantly crouched in the corner under the bright beam of a flashlight. They all called for me to GET UP! and LOOK! at the SIZE! of this SPIDER!!!

Nope, no way. I wasn't going to get dragged into that spider adventure. He was all the way across the porch from where I sat. I had no interest whatsoever in that spider.

Cameras appeared. Pictures were taken. Oh wait! Something for scale! A Bic was tossed into the corner amid renewed girlie screeches and prancing. More pictures were taken. Still I sat relaxed in my chair. That spider had nothing to do with me. I was Zen. 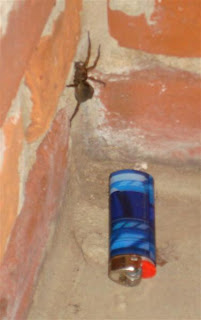 My eyebrow quirked when Oliver got involved. As the weather has warmed, Oliver has become a regular occupant of our porch. He likes it out there. I've seen him chase crawling things. He eats them.

Oh what a deadly game was set into motion that night. The Spider was doomed to be an Ollie snack. I leaped out of my chair in horror as the others cringed and groaned and cheered. Oliver batted, snatched, crunched, swallowed then licked his lips as he sauntered away.

I looked at the pictures later.
It really was a big spider.
.

He Did Eat It

The food pictured in the previous post was my very first attempt at making chicken and dumplings. We ate it, a bit hesitantly at first then with greater gusto. Kudos to those who guessed correctly! The mushrooms were an afterthought and I'll probably leave them out next time. Yes, there will be a next time. The dumplings were just as delicious as the ones my mother used to make. Yummy.

The Boy is having decidedly different culinary experiences on his travels: 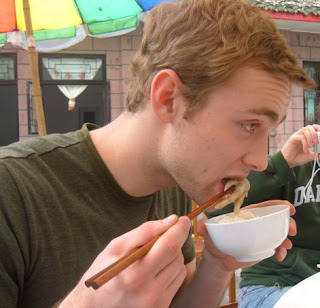 This proves to me once again that The Boy will try anything. Even the foot of a chicken.

Did We Eat It?

I spent some creative time in the kitchen this afternoon. Imagine my dismay alarm horror surprise when it manifested this way: 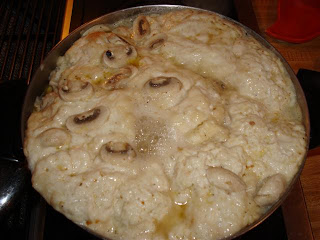 So give me your best guess, folks.
What is it?

I've only attended one RenFaire and it was when The Boy was this size: 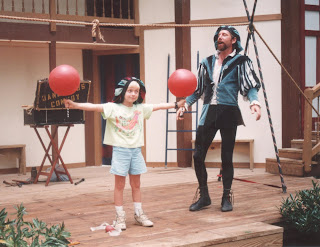 Recognize him? Of course you do. Yes, it's been awhile. Wendy and I are going to another one this weekend. In North Carolina. With people we've not yet met but already know. Sans youngsters, it's bound to be a different experience on a number of levels. I shall swill beer and call it mead. I shall resist the temptation of cheesecake-on-a-stick. There will be jousting. And cleavage. Huzzah? Huzzah!

Carolina is gorgeous this time of year. I sort-of-but-not- really-because-time-passes-for-a-reason miss our periodic travels there while The Boy was in college. This trip is something else altogether.