While brushing your teeth, do you usually:

A. Wander around multi-tasking, or

B. Remain stationary at the bathroom sink?

Thank you for your time and have a nice day.

The Ostrich and the Sand

At times I feel like I live my life with my head stuck far up my ass.
At times I like it that way.

I've been excitedly blathering about our accomplishments at home, completely avoiding the topic of turmoil to the south. This is graduation week but The Boy will not be walking with his class. Surprised? Us too. The what-where-when-why-how of that are his and his alone. I am but a hanger-on, albeit with a heavily ve$ted intere$t.

It is an interesting exercise to let go without letting go. Of course, this circumstance is fucking killing me not the end of the world. The show will go on, the fat lady will (eventually) sing, blah blah blah. Blech.

If he were a helium-filled balloon I'd grab his string and knot it tightly around my wrist, all the while chastising myself for losing my grip to begin with. But that's not my job anymore. Instead I get to watch him bob erratically across a cloudy sky, my heart in my throat, as he finds his bearings. I do so love that boy.

This parenting stuff.
Oh my.
It's humbling.

We're growing grass.
Well.
It's actually more than that.
We're crafting a lawn.

A lawn is not just a ragged mishmash of green whatever.
A lawn is an even, lush expanse of pure and glorious green grass.
Soft. Cool underfoot.
Always the perfect shade of green even on a gray day.

Visualize such a lawn.
Oh my, I can already feel it between my toes.
I want it.

It takes a lot of water to grow grass.
It hasn't rained much of late.
So we sprinkle.
Twice a day, every day.
With quasi-religious fervor. 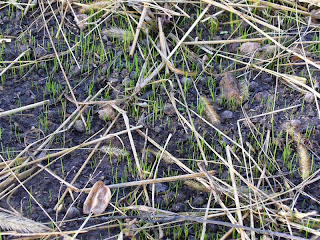 We're growing grass.
It's serious business.
I'm expecting water bills even higher than when The Boy lived at home.

I've never before had occasion to grow grass from seed. I am completely enthralled. We have germination! These blades, thin as thread, stretch confidently upward.

Such a lawn as the one we desire is not a single year project. I'm thinking three years. I'm thinking in three years, with all due diligence, we'll be dancing barefoot in the backyard across our lush green lawn, our toes singing songs of happiness in tune with the landscape around us.

Another exercise in patience.
Can a person have too many?
It feels good to have begun.
.
12 comments:
Labels: Home Improvement

The Laundry Room Smackdown was a rousing success.
Schmeggle (us) and Gafunge (them) no more.
Yes. Rousing! Quite.

We started in late March and finished in early May, say six weeks. I originally projected three. My optimism often gets run over by reality.

Ayup, we're the same brand of lazy. We share common interests and, evidently, work ethic. Yet what we did to our Laundry Rooms is quite disparate. Is anyone surprised?

One of the best parts of this project? We had the tools and knew how to use them. Costs were reasonable, kept low by reusing leftover supplies from prior work. The learning curve didn't kick our ass. Well. At least not as hard as she used to.

We survived tolerated enjoyed five consecutive Sunday sojourns to the laundromat while our suburban Laundry Room was out of service. (Yes, we still call it the Laundry Room. Wendy vetoed a name change. Interestingly (perhaps only to me), the furnace no longer seems to mind. Go figure.)

This morning it was there. 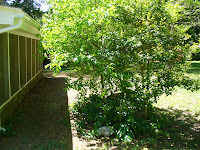 By afternoon it was bare. 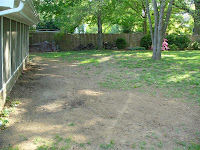 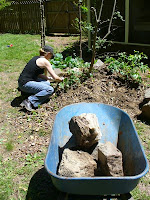 Much like the dandelion field, that blob of foliage garden stood in the path of progress. We saved the rocks. And the hosta. We have plans for them elsewhere. The rest we neatly bundled for curbside pickup.

Wendy excavated an assortment of oddities buried in the dirt, among which was a four foot tall iron mailbox post, a beach ball, a handful of old school pull tabs, two croquet balls, a hammer, a green & white glass marble, and a seemingly endless coil of fat rope that resembled an enormous earthworm as she tug-tug-tugged it out of the soil.

An ancient shrine to suburban living? Usually ghosts from the past have something more interesting to say. The marble is pretty.
The next few weeks will be all about the yard. We'll be digging holes, moving some plants, eliminating others, spreading dirt, weeding and feeding, growing grass. Can you feel the excitement? I'm all aquiver.

Meanwhile after today's labor, Wendy is on the couch with her knee iced and I just swallowed three Aleve.

No pain, no gain. Repeat three times, have another beer and call me in the morning. That's good advice on any given day.
.
10 comments:
Labels: Home Improvement

Making a Point to Waste My Time 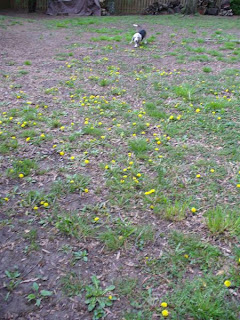 Here's Dudley tiptoeing through a large dandelion patch. Such a healthy crop we have this year! Unfortunately for them, they sprouted directly in the path of progress. This time next week, our backyard drainage will have been installed; the route cuts directly through where those dandelions now grow.

Today was one of those weather days that compels a body to be outdoors. I have a body. I was compelled. Situating Wendy's lawn chair in her favorite spot, I was offered a pleasant unobstructed view of the backyard expanse. I settled in with my creature comforts. I've been reading Animal Dreams and wanted to finish it (the ending held few surprises but it's a worthy read).

Sitting in the sun makes a body sleepy, even moreso when one is stretched out in a comfortable chair being caressed by a gentle breeze and lulled by the whisper of the trees. The sounds of the suburbs are a symphony. I soaked it up. Such was my lot this beautiful day.

Terribly self-indulgent, yes? To snooze in the sun for hours? On a weekday? One might think so, but I was busy. Busy letting my mind clear.

Sometimes what appears to be wasted time isn't time wasted at all.
.
12 comments:
Labels: Me Myself and I
Newer Posts Older Posts Home
Subscribe to: Posts (Atom)