Because it is the second of the month and I'm a bookkeeper who freelances part-time, today was not one of my "easy" Fridays. I've been to downtown DC and then hauled ass to another client's office in west Alexandria. Thankfully the traffic cooperated. I arrived home and began my arriving home routine, which consists first of greeting the animals and then letting them outside. While they tend to their business in the backyard, my routine then takes me down the driveway to the mailbox to retrieve whatever goodies the mail carrier may have brought us.

And surprise! Some time between when I had driven into the carport and then returned to fetch the mail a few minutes later, someone had planted a little American flag next to our mailbox! See? 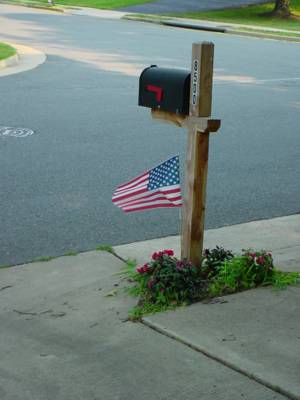 How cool is that?

Note: Since the hellacious rains this weekend, the impatiens are looking much happier. Quite a nice setting for the flag, IMOHO.