Along Came A Spider

Of all places, a spider has taken up residence in our shower. (Yes, the same shower that Wendy and I built all by ourselves. Feel free to oogle the lovely tile job, although this photo does not come close to doing it justice.) Mr. Spider is dwelling under the attachment for the towel bar opposite the shower head. We did not invite him. 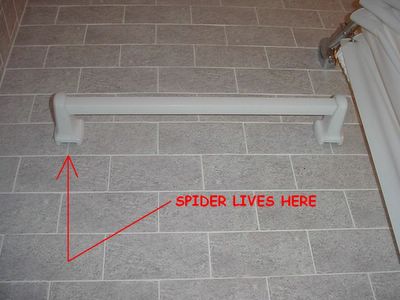 I saw him for the first time during a shower several weeks ago. A few of his black spindley legs waved menacingly as he peered out from beneath the fixture. Instantly on guard, I kept a sharp eye out for further encroachment while I finished my shower. I even washed my hair with my eyes open, no easy feat, but I wanted to leave nothing to chance. Being naked and wet, I was extremely vulnerable to a sneak attack by the itsy-bitsy spider such a terrifying predator!

The next morning, there was no sign of Mr. Spider. I decided he had moved on to a more comfortable place to spend the winter. After all, there certainly is not much space to weave a web where he was. What type of food could he catch without a decent web? Not to mention there just aren't any other bugs hanging out in our shower for him to trap and devour. I didn't give it another thought, feeling certain he had relocated.

This past weekend, however, we saw his creepy legs poking out from the same place! He is still there! Has he been there all those weeks since I first glimpsed him? WTF does he do all day in there? What is he eating? Is he some sort of mutant voyeristic spider who enjoys watching middle-aged women shower?

Wendy attempted to lure him out but only succeeded in driving him into the depths of his sanctuary. I guess he'll leave when he's ready. Meanwhile, I remain attentive while showering.

I feel like singing. Please join me in a chorus of "the itsy bitsy spider. . . "

I've been encountering a similar kind of situation in my new basement bedroom/bathroom. There's just nothing like turning on the water and watching all sorts of blurry (no glasses) movement suddenly take place. As soon as one gets washed down the drain, another comes to take its place.

Uh-oh ... I hope they're not out to avenge my inadvertant arachnicide .....

Hopefully it will jump down the plughole and put everyone out of their misery!

I noticed you kept saying it was a "he" spider. What if it's a female with babies? Oh the blog entries you could post. Good luck killing your spider! Atleast it wasn't a snake and you haven't had to smell sulfur all week long. See my post. Yuck and keep your eyes open, I know I would!

Oh my God, my skin is crawling. How can you take a shower knowing that the spider is in there? Oh, I am *so* freaked out by spiders that might now have problems in my own shower!

My favorite part of the diagram is the helpful label.

incurable hippie--I read your name out of the corner of my eye, and I thought it said "lickable hippie." I have no real explanation for this.

i often have a live and let live attitude toward house spiders. altho i do frequently relocate them. i will shower with a spider if he is in a stable place...and not one where the humidity may make him lose his grip and fall on my head. these rogue spiders are always 'he'. spiders in more permanent accomodations are always she. i don't think its as sexist as it is Charolettes Web.

Mel makes me laugh! I love her sense of humor.

I just relocate the little guys when they get in the way. Peferrably outdoors, but only when it is warm enough :)

We did not invite him.

It was at this point, I believe, that the coffee came out of my nose.

I know I'm destined to 1000 lifetimes in purgatory with no one but spiders to keep me company...but I would blast him out of there with any sort of aerosol product you got!

Might I suggest a good spray insect/spider killer from Lowe's or some such place? Surely a good shot of that will take care of that voyer!

C'mon, spiders are our friends! Perhaps not close enough to shower with, but a vital part of our ecosystem!

Unless they are on or over my bed or in Mr. Personality's bedroom, I usually let them be.

I don't love spiders, but by studying them, I have mostly overcome my previously severe arachnophobia. Despite not wanting them in my home, I never kill them. After all, they eat bugs and what more could you want?

As for the no-web thing, some spiders don't spin webs, they actually hunt their prey. Your spidey pal could be a jumping spider (ominous name, I know, but they're pretty harmless).. I've had a few of them and because they stalk their prey, they have scarily amazing eyesight.

On the bright side, if he's not catching much, he'll probably move on.. and if he is, then at least you can be assured your towel rack is bug-free. Also, if it is a jumping spider, I wouldn't worry about it leaping on you mid-shower because those spiders are very wary of anything that much bigger than themselves.

How bizarre! My shower is has no such hiding places, it is approximately 24 inches square which means if I drop the soap, I must open the shower door so I have room to bend over and pick it up, I kid you not! And glad you're not thinking of killing him/her, you know SK and I would have something to say about that!