I call the job I work three days a week my “real” job. What makes it real is it provides all the accoutrements of a full time job. Things I consider real, like insurance, vacation pay, a retirement plan and other such niceties necessities of life.

I chat with one of the other female employees on a regular basis. She and I have a few things in common besides working for the same company. We were born in November of the same year, we each have a boy in college, we both grew up in Alexandria. That’s where the similarities end for the most part.

She has three children, all boys. One in college, one in high school and the third, well, the third isn’t old enough to start school yet. Yikes.

So while she’s enduring all the trials and tribulations of her children growing up and leaving home, she’s also re-experiencing the joys of having a toddler. He does attend some sort of preschool. My co-worker uses words like “playgroup” and “parent co-op” and “timeshare sitting”. Such terms were not in vogue--I’m not even sure they existed--when The Boy was a toddler.

She’s an avid photographer and of late has been talking about the scrapbooks she’s putting together for her children. She mentions Stamping It Up parties and says she attends to get ideas. I nod and smile. She speaks of page counts and background color choices and cropping styles. She analyzes organizational methods and scrapbook philosophies.

Inside my head, I’m all like “Scrapbook philosophies? WTF?”

But I like this woman. She has a courageous heart. So outside my head, I nod and smile.

In the spirit of conversation, I told her about the book I put together for The Boy. It’s the only scrapbook I’ve ever compiled. Oh I've started others, but never got very far. This one I made for his high school graduation party, for his friends and family to see the chronicle of his life. While some thought obviously had to go into organization, it was hardly what I'd consider philosophical. 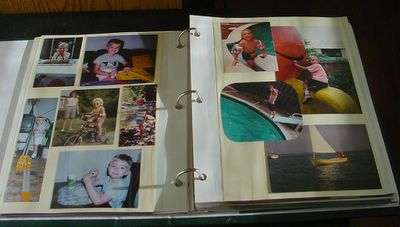 Working on that scrapbook was part of the process of letting go, although I was unaware of it at the time. Hindsight can be quite revealing. I wonder how I miss such things as they are occurring.

My co-worker asked if I would bring the scrapbook to the office to show her. “Sure,” I said, “although it’s really just pictures in a book. It's not fancy, nothing like you’ve been talking about.”

Ever so modest, that’s me. But seriously. It’s just pictures in a book, right? 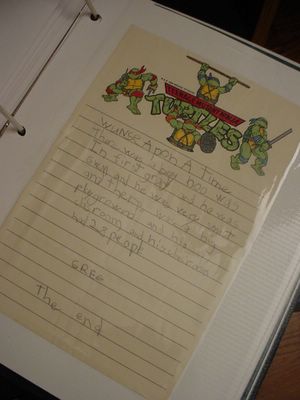 It had been almost two years since I’d looked at that scrapbook. Our photos and other family mementos had been stashed in a storage unit with many of our household possessions after we moved. When we finally brought everything home a week or so ago, that book was the first thing I looked for.

I settled down to peruse my handiwork and was caught a bit off guard by the flood of emotion. Silly me. How could it not inspire emotion? Our only child’s life from birth through high school. Family, friends, places, pets, activities---jam packed with memories, it is.

Scrapbooks are time machines, at least this one is. "Do you remember what your mom looked like in 1986? Well here she is! Oh wait, that's not your mom at all. That's your grandmother! Yes yes, she does look young, doesn't she? And so thin!"

I also included in the book a few pieces of his schoolwork that speak of him as clearly as the pictures do. One was a story he wrote in first grade on Teenage Mutant Ninja Turtle notepaper. (Egad, does anyone else remember those Ninja Turtles?) I can still picture him hard at work, head down, his pencil gripped firmly.

It struck me as I turned the pages, that while it will become his eventually, I didn't really put it together for him. I thought that's what I was doing at the time, but now I'm pretty sure it was for me. 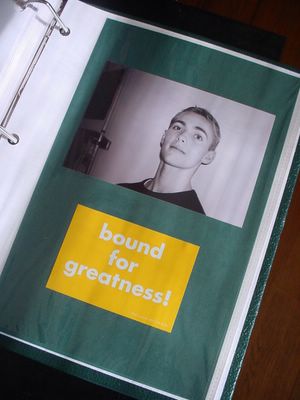 My sister gave him that "bound for greatness!" sticker. It had been on his bedroom door for years. Some people say this picture looks like a mug shot but I disagree. I like it because I see the twinkle in his eye, the hint of a smile, the vulnerability just under the surface, the promise of all that is to come.

The Boy is handsome. But you know that.

Such a nice post, ah memories... I'm all verkelmpt now...the rise and fall of the Roman Empire and it's impact on the fashion sense of the Middle Ages...tawk amongst youselves...

I do remember the Turtles, it seems like just yesterday but it was a lifetime ago in a galaxy far, far away.

OMG - I guess it's been a while since I've seen a recent picture of him - how handsome and beautiful he is! And what a nice thing for you to do for him, putting together that scrapbook. Hey, when your sis drives out next month, I'll send some scalloped scissors and stickers and special papers with her for you, whaddya think? ;-)

I love your introspection here. It speaks so much about you. You are a very honest individual...

I am so not a scrapbooking type of mom! I do need to get something together, though!

The Boy is very handsome indeed, I don't think it looks like a mug shot at all.

He is gorgeous! GORGEOUS!

I think the mugshot may be bcs of the colour and the raised chin. But it should all be good, he's got lovely body language. I think Greatness may not be an exaggeration, not at all.

He certainly looks bound for greatness--I can see why you miss him. I don't do scrapbooks, but I do fill album after album with photos. We have a history of our lives from our wedding till now in those books. My mom did the same thing, and I loved going through them to see what we looked like in the 50's.

OMG, I used to sell Stampin'Up!, and I couldn't scrapbook my way out of a paper bag. I like stamping because I can't draw but I love homemade.

The scrapbook craze of today is more about something to do with and for your children, and most of it is way too cutsie for me.

The Boy is a good looking young man, and as life ebbs and flows, he will continue to grow towards his future, but will always remain connected to you. They seem to have to go away to come back. But really they are always connected.

I'm embarrassed to admit it, because I always thought the scrapbooking thing was really cheesy. In fact, there was a scrapbooking store near where I live and the letters in the sign were each a different color. The "s" in Addicted to Scrap was yellow, so the sign naturally looked like "Addicted to Crap", which I thought was appropriate.

But THEN, last week, I found a digital scrapbooking magazine and fell in love. I don't even have any kids, just pets, but the layouts were fabulous. Anyway, I blather on to say, here, look at this - http://www.digitaldesignessentials.com/files/Digitally_Sparked/Digitally_Sparked_Gallery.html

I have no connection with that site, just that it has some of the cool pictures that I saw in my magazine.

I sum it up with...I like your blog, and your son looks like a happy young man.

Well, if your not a scrapbooker you should be! Girl you got the journeling down! Props from a serious lesbian scarpbooker!