Saturday: Road trip to historic Charlottesville, Virginia, home of the University of Virginia, home of the Heritage Summer Repertory Theatre to see The Boy's girlfriend in their production of Damn Yankees. Hellish traffic, fine show, excellent conversation over an early dinner afterward. This was the inaugural road trip for the Subaru Baja that now calls our house its home. It passed with flying colors. 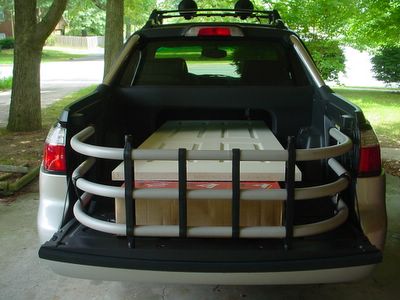 Sunday: Trip to Lowe's for supplies for the inevitable weekend house projects. Two jobs: replacing the rickety folding stairs to the attic and installing a new door on the shed. Another first for the Baja as we made use of it's truckish nature to transport said supplies.

Then, ah then! Then we undertook pet-related chores. Dog beds were washed as well as dogs themselves, nails cut, ears cleaned, hair trimmed. Ah! Shiny, fresh and neat! Time to reward ourselves by doing nothing except reading and watching baseball. We sucked down a few brews in honor of the anniversary of Detail's death. How morbid? How festive!

Monday: Time for those house projects! Wendy and I hate hanging doors so we started with the stairs. Others may have tackled the least favorite job first, but not us. We are nothing if not grand procrastinators. 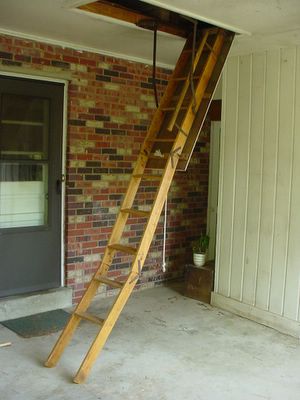 This photo isn't worth 1,000 words. Those stairs swayed, creaked and crackled when climbed. I always told myself, "Self, it's not that far to fall should these rickety stairs fail and you plummet like a stone to the concrete surface below. Really. Worry not. It's just not that far down. Crumpling will be at a minimum." Dig the groovy angle kicking out at the bottom.

Old style stairs have huge springs as the closing mechanism. New stairs have hydraulics. Huge springs really sproing when they are released. Is there a safe way to remove those springs? We musta used an unsafe way. One sprang all the way into our neighbor's yard. We don't know what happened to the other one. Seriously. It just disappeared. We think it sproinged into the attic somewhere. We hope it did. Maybe we'll come across it when we dig out the holiday decorations. 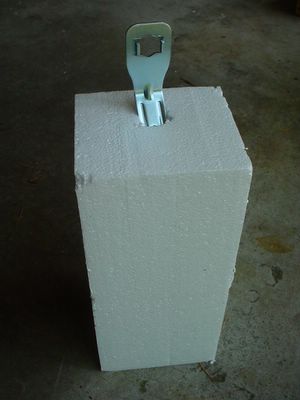 When we unpacked the new ladder, we discovered a block of styrofoam with a protruding handle. Sword in the Stone, anyone? Around Step 10 or so in the installation process, the instructions spoke of a special tool required to prime the hydraulics: the Wrench in the Foam!

There are many home repair tasks where having brute strength is an asset. Or at least having access to brute strength. Oh sure, brains can overcome the need for brawn in many instances, but there remain jobs where muscle is a true necessity. Turns out it is a serious benefit to be very strong if one is attempting to install an attic ladder. Wendy and I are strong enough to fake it when necessary. We had to really fake it for this endeavor.

Well. We didn't have to fake it to extract that tool from that block of styrofoam. It slid right outta there. 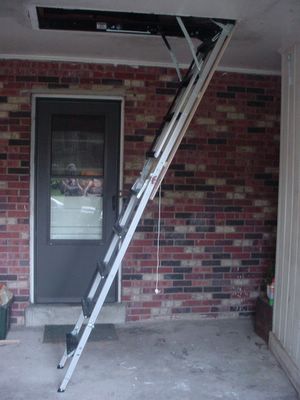 This ladder may not look like it weighs much. Somewhere between a bread basket and an automobile depending on how perceptive you are. Let's say two Cosines and a Figero. A week's worth of groceries and a large bucket of cat litter. Six cases of cheap beer and enough ice to chill it for a weekend. We held it over our heads. While we balanced on ladders. Wielding power tools attaching brackets and bolts. Ug.

Yeah. So even with a dearth of muscle, the job gets done anyway. Booyah. Or something like that.

It's great when what should be Monday morning is actually Tuesday morning.

Well done. Certainly far more of a vigorous weekend than I. I think you rock.

I got my new Baja a few months ago. It's the best car/truck/cruck ever. My favorite feature are the slits in the leather of the back seat in which you can slide seat belts so they don't get lost when you've got the whole works opened up for your ski's/surfboard. Very clever:) So, Mazel Tov on the new car!

Ok...glory is over, I want to see doors!

Made me orgasmic, too.

I myself feel I could tackle quite a few projects simply due to the fact that I have by now probably watched over 100 hours of Bob the Builder.

I'll let you know how they work out.