I have crowned myself the Queen of Lists, forever shall I reign in piece. Piece of paper that is. (I figured I should grab this title for myself before it occurs to my friend Tina to snatch it. Now there's a woman who can make some lists!)

My mother could be another candidate for Queen of Lists had I not already claimed the title. She maintains the Mega Mother of All Lists. It's a list of books, both that she has read and that she would like to read. When she finds a new author she enjoys, she looks up everything they have ever written and lists them on her list. The titles are coded. She has one symbol for books she's read, another for books she has on hand but has not yet read, and books with no symbol alert her to keep an eye out for them. Comes in right handy at the semi-annual book sale held at her local library. I covet that list of hers. 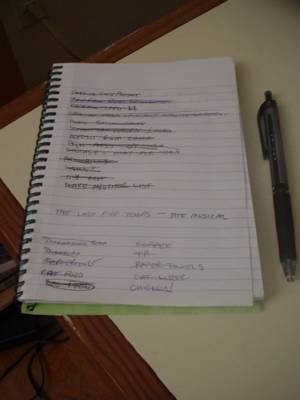 But it's all about me here. And my lists. Which are wonderful lists indeed. At least to me they are.

I am very excited with a new purchase. It's a bound notebook, about 5"x7" and fits into my purse. The cover is green. The pages are lined. It cost $1.27 at Wal-Mart. Oh yes, it's the simple things. Now I can keep my lists all together instead of attempting to keep track of several lists on different pieces of paper of differing colors, sizes and shapes. Those separate lists get lost far too easily. Then weeks later when they are found, sometimes mangled and barely legible, they are out of date and useless. And worst of all, the things on those lost lists may or may not have ever been taken care of! Oh the things that slip through the cracks when lists get lost! It's best to not to speak of such things.

I've been making notes and adding to my lists in my new bound notebook for several days now, ever since I got it. One page may hold several different lists. The lists vary in content. Some are things to do while others are things to get. Some are things I just don't want to forget. Those are the lists that rarely have anything scratched off.

Today I scratched a plethora of items off both my "get" and "do" lists. Today I was the model of productivity, thanks in a large part to my lists. And in part, of course, to my new notebook which keeps my lists neat and orderly. I was so efficient I got things done that hadn't even made it to a list yet.

Hence my new title. I feel I've earned it.

I am deeply impressed, oh Queen of Lists.