Hello, my name is Suzanne and I'm a binge-a-holic.

"Hello Suzanne!" the crowd calls out.

It's been two months since my last confession.

Over the course of those two months, I've ingested a ton of the target of my current binge. Well. Maybe not an entire ton. Let's see. Five containers, each containing 21 ounces. So like 6.5 pounds. May as well be a ton.

It started out innocently enough. Wendy and I were shopping at Trader Joe's. While perusing the displays of nuts, candies and other luscious snack options tantalizingly lining the aisles, my eyes were drawn to a neat stack of square plastic containers filled with brightly colored candies.

Ah-ha! My brain snapped to attention. Those candies appeared to be the little fruity jelly disks I so adore but rarely see in stores! I felt that familiar tingle run up my spine. I looked around furtively to see if anyone was watching. The coast was clear. I made a beeline to the display for a closer look.

Sure enough, there they were: the delectable delights of my fantasies! Soft. Sweet. Fruity. Round. I wiped the thread of drool off my chin as I loving placed a container of them in our cart. 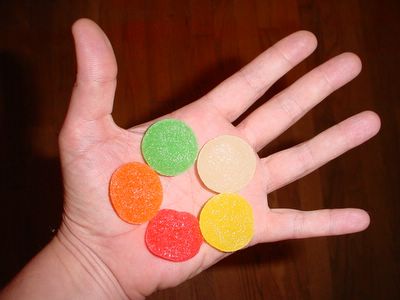 These candies come in an assortment of five colors and flavors: red is cherry, orange is orange, green is lime, white is grapefruit, yellow is lemon. Their centers are soft and smooth, ever-so-slightly sticky. Their exteriors are crusted with sugar creating a tasty delight unsuitable for carrying around loose in one's pocket or purse. Each one is a little larger than a quarter but about five times as thick.

One of each color constitutes a Suzanne Serving. Those five candies equal a perfect Suzanne Snack for a quick pick-me-up any time of day. I have favored flavors but not a favorite flavor. I don't always eat them in the same color order, but I always eat a white or yellow one first. Sometimes I bite them in halves but usually in thirds. I never eat them whole.

I should have known right away that first box was the beginning of something, shall we say, untoward? I think I did know, but I jumped off the cliff anyway. Self-indulgence personified, that's me. The next week found me schlepping off to the Traitor Trader Joe's near my office to replenish my supply. I bought two containers on that trip. Two weeks after that I was back again for two more. I've half a box left and think it'll carry me through the weekend.

But after that? Then what?
Somebody help me.

Eating them whole is sacreigious!

Summer is backsliding time. For me, it's Cherry Garcia. I hadn't had any ice cream in probably five years, but last week I broke down and bought two. One is gone, one is still there, calling my name. You have to convince yourself that they are bad for you and ultimately they will shorten your life. Does that mean I will not eat that other container of deadly cholesterol-laden sugar? What--are you nuts? I think I'll start on it right now!

I'm hooked on some of Trader Joe's trail mixes with chocolate and vanilla chips in them mixed in my fave yogurt from Seven Stars Farm. I am also powerless over chocolate in almost any form. I just keep exercising!

OK... I'm feeling weak. Are these Trader Joe's originals or something that I can get my hands on?! (Sadly, I don't have a Trader Joe's nearby - and I HAVE TO FIND these tantalizing bits of heaven!!)

Reminds me of the Milton Bradley game "Twister", except now I have everyone playing out of the palm of my hand.

OMG, my grandmother used to buy something similar when I was a young'un. Total flashback to the seventies when I saw those.

My kid loves those candies too!

And, um, me too. But just, you know, cause they're there. I could stop eating them any time. Really.

Sean and I went to our new Trader Joe's location and walked out with way too many impulse items including Key Lime White Chocolate Cookies, Ginger-Roo Cookies, Pirate Booty and frozen salmon. It's too bad Maryland stores can't carry wine since TJ's prices are fabulous.

I just went to Trader Joe's for the first time yesterday. I drove by one about an hour from home. They have some GREAT STUFF there.

OMG. Wish I could have eaten it. Couldn't.

I love those and there is no where to get them here. I always bite them in half for two reasons:
#1. The shininess of the inside is really half the joy of the candy.
#2. I like the marks my teeth leave behind. I have always been fascinated with the little grooves and protrusions...it's the other half of the joy.