I Lost the Pool, But I Still Scored

Back in March, I blogged about the American Idol betting pool we joined with friends. We had 28 people participating, four of whom still had a chance to win depending on which of the two remaining contestants reigned supreme during the final round of voting. At $5 at head, there was $140 riding on the outcome. 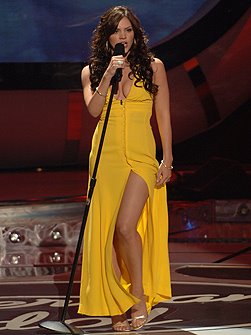 I will boast that I, yours truly, yes moi, was one of the four. But I was tied with two others. If Katharine had won, the pot would have been split three ways. Only one of our friends predicted Taylor to win. That same friend had also correctly predicted the exit order of two others in the top five. She deserved to win and, with her first baby on the way, can certainly use the money.

As for me, well. Taylor's okay, but Katharine is my winner. I mean, hello! Have you seen her in this dress? Yow!

Oh. And I truly enjoy her voice and performance style. That's the gravy for a shallow woman like me.

Katharine is MY winner too! That dress is jaw-dropping hot...but she does have an amazing voice to back it up. :)

Sorry, I've got a little crush on Taylor, so he has been my guy for a while.

Katherine, while being beautiful and having a good voice, just didn't quite connect with me during her performances.

However, I'm sure coming in second won't necessarily be a bad thing for her.

I must agree...great dress. I am still puzzled by the long shot of David Hasselhoff crying though...

Now back to that dress... you mean she sings too?

She's gonna be a star, I think. No matter what.

I correctly predicted that Katherine would come in second place. Do I win anything? However the show has it all wrong. Chris was supposed to be #1, not Taylor. :P

Have I ever mentioned how much I love girl-watching with you???

That woman is going to be my wife.

Taylor and Katherine both turned out to be winners.

Heh. I agree, Katherine was quite the hottie. When she sang in that dress, I couldn't even pay attention to the fact that she was singing -- heh, oops. Did I say that?
But Taylor is my homedog.
SOUL PATROL!!