I just realized it's been ages since I've blogged about my hair.

Actually, strike that. I've conscienciously avoided mentioning it. I do, however, wrestle with it on a daily basis. I've begun the waffling process between "Should I cut it all off?" and "Oh hell, just let it grow. I can always cut it later." 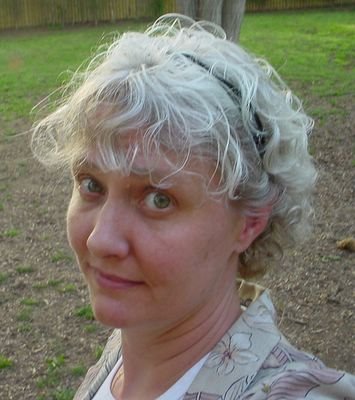 Sure. Later. After I've wandered around looking like a wild-haired crazy woman for however long it takes me to come to my senses. Still, for some reason I feel this is an experience not to be missed. I had had the same hairstyle for over 20 years before I began letting it grow six months ago.

Over twenty years! If that doesn't qualify as being in a rut, I don't know what does.

I'm hopeless with hair. I have two styles I can "do": super short, or wild all over the place. So I tend to alternate between the two: chop it off, grow it back, repeat.

So most of the time, I'm in a state of "in between" in which I can't do a thing *with* my hair except watch it do its own thing.

Wow, you're a cutie. Love those green eyes!

Cool you for staying silver. Most run to the dye bottle. I haven't colored my silver yet, it is just on the sides right now (long hair) but when I pull it back in a braidbun for work I look all grey.

I like it.
we really need to sit down with a cocktail and discuss our hair sometime.

Love that dubious look on your face, heh. I have a weak spot for curls!

keepitkeepitkeepit!!!! It's so cute! The little hairt band thingie and the curls and the silver = gahwjus.

As one who has had a long love/hate relationship with my hair, I can totally relate. Every few years, I go to the salon and say, "Do whatever you want!" which seems to necessitate cutting off 12 to 14 inches of hair. In between, it grows and grows and grows...

Love the silver/gray/white on you. I want to go natural when my hair goes all white (only about 1/3 of the way there now) and see what happens, though I'm not sure how to make that transition with long, dyed red hair. Seems like I might look really, really bad for a few years waiting for it to grow out. Hmm. Do people dye their hair gray?? I have no idea.

As you can see, I can write a lot about hair. I say, let it grow until you can't stand it any more and then spend a ton of money getting a fabulous hairstyle you'll have for the next 20 years!

You are PRETTY. Wow. You have lovely everything.

Not so much fair, though, that you have the pretty and the talent and the brilliance....

Good for you letting your hair just be! I'm salt & pepper, too! (alright more salt than pepper, if you must know!) It's cool!

you're so cute...I say let those curls grow...! My Dragon loves to play with my curls.

URAQT! And the hair looks great!

Suzanne, I love the hair, but babe, your bangs need a bit of a trim, unless you are trying to grow those out as well. And growing out bangs is a bitch, so good luck with that!

Likin' the hair band- as well as the expression on your face!

And, not to make your head swell any further since I will now be the 7th person to say it, but you are indeed cute!

Yeah, what everyone else said! You and your hair are v. cute. :)

Liz here, I Speak of Dreams. I like your hairstyle the way it is. And hooray for those of us who don't cover up the silver!

Mine's fine -- and now below my bra line, cause I can't figure out what else to do. I had coffee with Ronni Bennett (of Time Goes By) -- also silver, also long (shoulder length).

I can't do the hairband thing -- so fine they just fall out.

The picture is great. I loathe most photos of me.